About the SFPD Tenderloin Station

The Tenderloin District Station, located at 301 Eddy Street, covers a downtown area of about 50 square blocks, bordered by Geary Street to the north, Mission Street to the south, Polk Street to the west and 3rd Street to the east. Officers who serve at Tenderloin Station protect a diverse community of local businesses including a growing population of technology firms such as Twitter, Dolby and Zen Desk. The District also include the Westfield San Francisco Centre, Hallidie Plaza, Civic Center Commons, United Nations Plaza and the Theater District as well as the city’s main public library and the Asian Art Museum. This vibrant neighborhood, which is one of the most ethnically, religiously and socio-economically diverse communities in California, is home to thousands of residents and numerous service providers and also includes several thousand children who attend nearby schools.

The Tenderloin faces many challenges, given that it has the highest concentration of parolees in the city and that drug-dealing and use are a significant blight on the neighborhood. The officers at Tenderloin Station are committed to helping keep the community safe and healthy. District officers have established and fostered strong relationships with community leaders, residents, businesses and government agencies and are aggressively targeting drug dealers in their efforts to reclaim the Tenderloin for the people who live and work there.

The Tenderloin Task Force, including the city’s first bicycle patrol – was created in 1991 to combat the high local crime rates. Originally it was housed in the basement of the historic Hibernia Bank Building. In October 2000, the new headquarters, now known as Tenderloin Station, opened at 301 Eddy Street.

This station is part of the San Francisco Police Department's Metro Division. 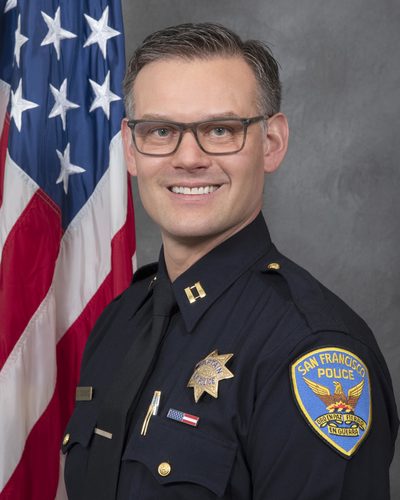 After graduating from the San Francisco Police Academy in 2007, Captain Canning worked as a Patrol Officer serving the Tenderloin, Mission, and Southern Police Districts. In his role as a Sergeant, he worked in the Mission Police District, the Criminal Investigations Unit, and the Homicide Detail. In 2017 he was promoted to Lieutenant and returned to the Mission Police District before being transferred to the Crime Strategies Division. In 2021 he was promoted to Captain and became the Commanding Officer of Tenderloin Police Station.

The latest from SFPD Tenderloin Station