The CPAB (Community Police Advisory Board) meetings take place on the 4th Tuesday of each month and they are located in the Northern Station community room, 1125 Fillmore Street.

About the SFPD Northern Station

The district boundaries are Larkin Street, Market Street, Divisadero Street to Broadway and west on Broadway to the Presidio. On the north, it is bounded by the San Francisco Bay.

The SFPD Northern station, on the corner of Fillmore and Turk, is a distinctive, low-slung building with turquoise-tiled walls and a light green door. This station is part of the San Francisco Police Department's Metro Division.

The latest from SFPD Northern Station 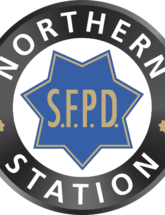