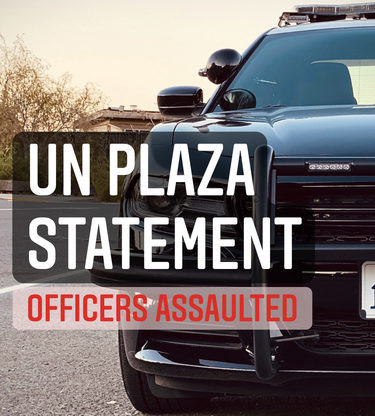 On Saturday, October 17, 2020, at 1:00 PM, a permitted free speech rally began in United Nations Plaza. In attendance were individuals in opposition to the free speech rally. Within minutes of the rally beginning opposition demonstrators began throwing glass bottles, plastic bottles filled with an unknown liquid, metal cans, and eggs at free speech rally participants and law enforcement personnel. Opposing demonstrators rushed the established barricade line in an attempt to knock it over thereby putting the safety of participants and officers at risk. One free speech rally participant was assaulted during the incident. The rally became so violent in nature it was declared a public safety hazard and was shut down. The rally organizer and participants were escorted from the area. As officers escorted rally participants from the area, opposition protesters continued to act aggressively. Several rally participants sustained non-life-threatening-injuries. Three San Francisco Police officers sustained non-life-threatening injuries when they were assaulted with pepper spray and caustic chemicals. One officer was transported to a local hospital for treatment. At this time no arrests have been made.