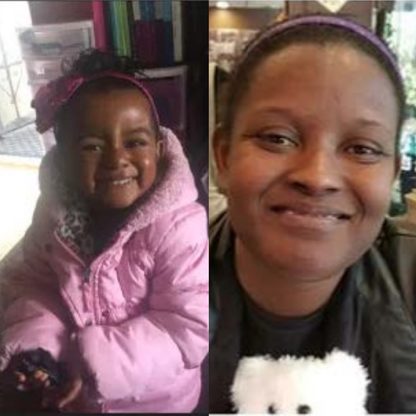 On April 8, 2016, the body of Nicole Fitts was found buried in McLaren Park by employees of the San Francisco Recreation and Parks Department. Nicole and her then 2-1/2-year-old daughter Arianna had been reported as missing persons by family members on April 5th, 2016. The investigation determined that Arianna was last seen in February of 2016 while in the care of her babysitters Helena Hearne Martin and her husband Devin Martin.

Investigators from the SFPD Homicide Detail, in collaboration with the FBI, have been working diligently on investigating the homicide of Nicole Fitts and locating Arianna Fitts. The Fitts family has been cooperative in providing information they have to help solve the case and bring the family closure. Unfortunately, Nicole’s murder and Arianna’s disappearance remain unsolved.

The San Francisco Police Department has authorized a $100,000 reward for information leading to the identification, arrest, and conviction of the person(s) responsible for the murder of Nicole and the disappearance of Arianna. In May of 2016, Nicole’s former employer Best Buy announced a $10,000 reward for direct information assisting in locating Arianna Fitts or indirect information based on her mother's homicide.

An SFPD forensic sketch artist also prepared an age progression sketch of what Arianna might look like today. Copies of the reward fliers including the sketch accompany this news release.

Anyone with information on Arianna’s whereabouts or the homicide of Nicole is encouraged to call the SFPD 24 Hour Tip Line at 1-415-575-4444, or text a tip to TIP411 and begin the text message with SFPD. You may remain anonymous.