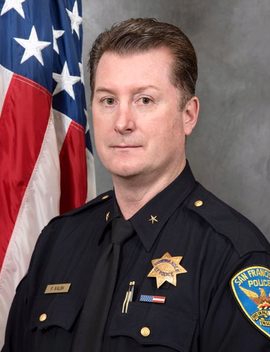 Commander Peter Walsh was born and raised in the Sunset District of San Francisco. He attended St. Ignatius College Prep and went on to earn a BA in Government from St. Mary's College and a JD from Golden Gate University. He joined the SFPD in 1991 and worked in the Park, Mission and Ingleside Districts. In his roles as Inspector, Sergeant and Lieutenant, he worked in Internal Affairs, Sex Crimes, Burglary, Special Investigations, as well as the Richmond and Tenderloin Districts. As a Captain, he worked in the Administration Bureau and the Risk Management Office. In February 2017, he promoted to Commander in the Chief of Staff's Office. In September, 2019 Walsh became the Commander of Field Operations, Golden Gate Division.