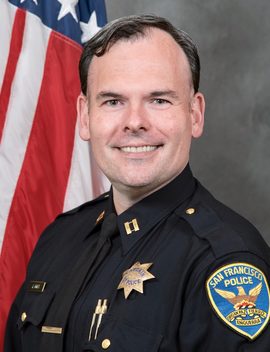 Captain Jack Hart joined San Francisco Police Department in 1999 and has served in patrol assignments, as a field training officer, and as an attorney with the department's Legal Division. He has taught constitutional law, criminal law, criminal procedure and leadership courses to more than 50 police recruit classes. As a sergeant, Hart led a street-crimes plainclothes enforcement team in the Bayview District. As a lieutenant, he was the officer-in-charge of the Candlestick Park detail, where he led the team of more than 100 police officers policing more than 70,000 people. As the captain assigned to SFPD's Homeland Security Unit, he supervised the Marine Unit and led the department's mutual-aid response to the 2017 North Bay firestorm at the Department Operations' Center. Captain Hart is also a master instructor in “Blue Courage," a police leadership course taught throughout the nation.