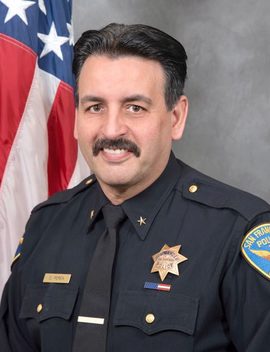 Commander Daniel Perea was born and raised in San Francisco. He earned a BA degree in English from the University of San Francisco.  He joined the SFPD in 1991 and was assigned to Mission Station.  He has served in patrol at Northern, Tenderloin and Ingleside Station. He has worked in the Administration Bureau and the Investigations Bureau.

He was promoted to the ranks of Inspector, Sergeant, Lieutenant and Captain. As an Inspector, he served as a federal Task Force Officer investigating high level drug traffickers operating in California and Mexico.  He was the Commanding Officer of the Forensic Services Division and of Mission Station.  In 2017, Perea was promoted to Commander in 2017 and managed patrol operations for the Central, Southern, Northern, Tenderloin and Mission stations, in the Field Operations Bureau. He currently leads SFPD's  Special Operations Municipal Transportation Agency Division.