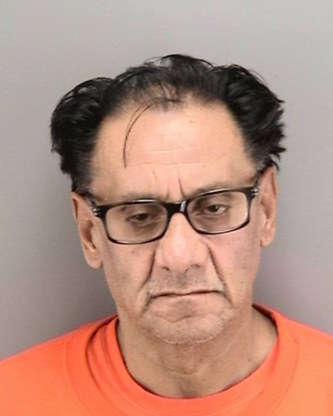 On Thursday, November 22nd, 2019 at approximately 10:24 PM, San Francisco Airport Police officers observed a subject entering a restroom and recognized him from a crime bulletin released by SFPD investigators.  The subject was detained and identified as 58 year-old Lancaster, California resident Mario Hernandez.

Hernandez has been identified as a suspect in numerous thefts that have occurred in the Bay Area and Los Angeles area since August of 2018.  Stolen items included purses, laptops, cellphones, wallets and credit cards.  Hernandez targeted numerous weddings and other events and seemed to travel frequently.

Hernandez has arrest warrants in San Francisco, Los Angeles and Nevada and has been arrested under 21 different aliases since 1980.  The most recent known aliases are Pedro Barcazar, Luis Amezquita-Torres and Pedro Ojeda.

Hernandez was booked at the Maguire Correctional Facility in Redwood City on two counts of 2nd degree burglary, four counts of grand theft and for outstanding warrants.

A booking photo of Hernandez accompanies this news release.

While an arrest has been made in this case, anyone with information is asked to call the SFPD 24 hour tip line at 1-415-575-4444 or Text a Tip to TIP411 and begin the text message with SFPD. You may remain anonymous.