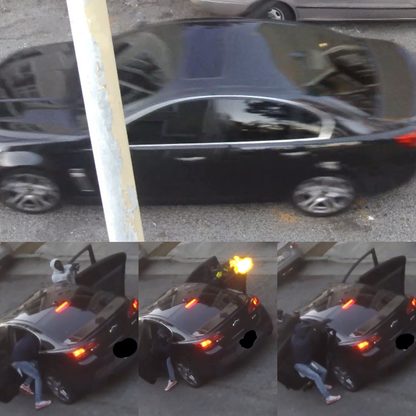 On Saturday, July 11, 2020, at approximately 8:19 PM, SFPD officers were in the area of Ingalls Street and Oakdale Avenue when they heard numerous gunshots being fired. Officers responded to the unit block of Osceola Lane and located one adult male victim suffering from gunshot wounds and was transported to the hospital for non-life-threatening injuries. Officers were informed by citizens that another adult male victim was shot and was transported to the hospital with a life-threatening injury prior to the officers’ arrival.

Based on obtained video surveillance footage, a black 4-door ‘Chevrolet SS’ with tinted windows drove southbound turned around then drove northbound on Osceola Lane. The vehicle stopped and four shooters released a barrage of gunfire towards the victims then fled in the vehicle northbound Osceola Lane.

Officers located dozens of rifle and handgun shell casings at the scene.

Below is video surveillance footage of the shooting and still images of the shooters and the vehicle are also attached.

Anyone with information regarding this investigation is asked to call the SFPD 24-Hour Tip Line at 1-415-575-4444 or Text a Tip to TIP411 and begin the text message with SFPD. You may remain anonymous.