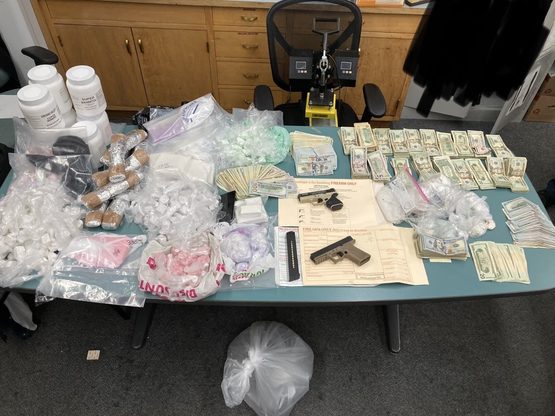 On Thursday, June 3, 2021, San Francisco Police Department Narcotics officers served three search warrants in Oakland, California on the 1700 block of 28th Avenue, the 2900 block of 35th Avenue, and the 9800 block of MacArthur Boulevard. These warrants were part of an ongoing investigation initiated by the San Francisco Police Department Narcotics Detail to intercept deadly drugs that were earmarked for the Tenderloin.

During the search, officers recovered two semi-automatic, unregistered, un-serialized firearms also known as ghost guns, over 45 thousand dollars in U.S. Currency, a “kilo press” and nearly 30 pounds of drugs which equates to more than 13 kilos, including more than 16 pounds (over 7 kilos) of fentanyl.

At the MacArthur Boulevard location, Narcotics officers found a large quantity of unpackaged fentanyl. The officers contacted the Oakland Fire Department (OFD), who declared the location a Hazardous Materials (HazMat) scene and rendered the scene safe.

Officers took into custody 5 adult male suspects whose ages range from 23 to 45 years old. The suspects were booked on various narcotics-related charges at Santa Rita Jail.

In the first five months of 2021, SFPD officers have booked 248 people for sales or possession for sale of dangerous drugs, seized over $104,000 in US Currency, and seized over 17 pounds (7.7 kilos) of fentanyl, over one pound (0.5 kilos) of cocaine, almost five pounds (2 kilos) of crack cocaine, over seven pounds (3 kilos) of heroin and over ten pounds (4.5 kilos) of methamphetamine.

"The amount of fentanyl seized in this single operation is enough lethal overdoses to wipe out San Francisco's population four times over," said Chief of Police Bill Scott. "Fentanyl remains the primary chemical culprit in the record-shattering number of fatal overdoses plaguing our City, and the recovery of semi-automatic ghost guns along with this haul of deadly drugs most likely intended for the Tenderloin is ominous. SFPD's Narcotics Detail and patrol officers have done heroic work in this operation and on the street every day to seize these deadly drugs and bring these increasingly dangerous drug dealers to justice."

Attached is a photo of the items that were seized.

While arrests have been made, this remains an active investigation. Anyone with information is asked to call the SFPD 24-hour Tip Line at 1-415-575-4444 or Text a Tip to TIP411 and begin the text message with SFPD. You may remain anonymous.