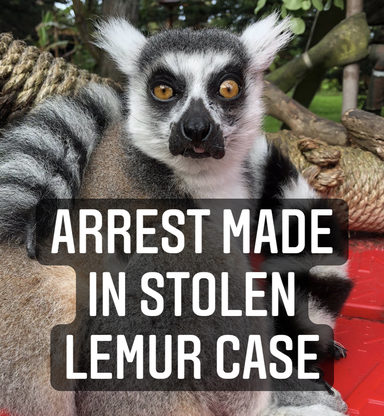 On October 14, 2020, at approximately 9:40 AM San Francisco Police Officers responded to the San Francisco Zoo regarding a report of a burglary that occurred overnight. A Ring-tailed lemur male named “Maki” was removed from its habitat and was missing. Officers arrived on scene and discovered forced entry to the animal enclosure where the lemur was housed. Investigators processed the scene for evidence and the burglary is under investigation. Investigators from the SFPD Burglary Unit assumed the lead in the investigation.

On Thursday, October 15, 2020, at approximately 5:00 PM, a witness was on the unit block of San Fernando Way in Daly City when she observed what she believed was “Maki” the missing lemur. The witness called 911 and notified authorities. Officers from Daly City Police Department responded to the scene along with officers from Animal Care and Control and staff from the San Francisco Zoo. The lemur was successfully captured and positively identified as “Maki.” “Maki” was determined to be in good health and transported back to the San Francisco Zoo.

Through the course of the investigation, SFPD Burglary Unit investigators developed information that led to the identification of the suspect, 30-year-old Cory McGilloway. On Thursday, October 15, 2020, McGilloway was arrested by the San Rafael Police Department on an unrelated matter. Upon release from San Rafael PD custody, McGilloway will be transported to San Francisco County Jail where he will be booked on the following charges; burglary (459 PC), grand theft of an animal (487g PC), looting (463(a) PC) and vandalism (594(b)(1) PC).

While an arrest has been made this remains an ongoing investigation. Anyone with information regarding this investigation is asked to call the SFPD 24-hour tip line at 1- 415-575-4444 or Text a Tip to TIP411 and begin the text message with SFPD.