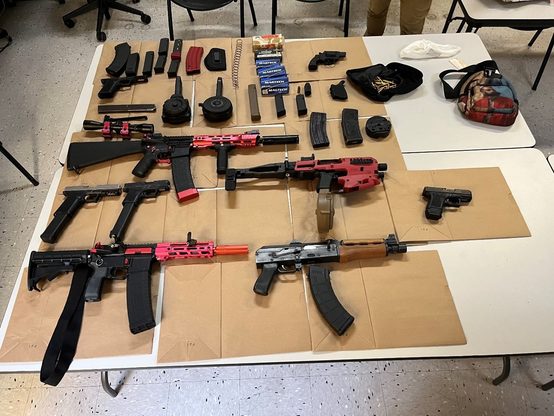 Members of SFPD’s Crime Gun Investigations Center (CGIC) link suspects to multiple shootings that occurred in 2021 and 2022, seizing several firearms including one assault pistol and two assault rifles. Six of the recovered firearms were “Ghost Guns”

On September 29, 2022, investigators from the San Francisco Police Department’s Crime Gun Investigations Center (CGIC) served search warrants at three residences on the 100 block of Northridge Road in San Francisco. The warrants stemmed from multiple shooting investigations beginning in March 2021 and continuing through September of 2022. The shootings occurred in the area of Northridge Road and Harbor Road.

Through the course of the investigation, officers identified three adult males who were believed to be related to the shootings.

As officers were preparing to serve the search warrants they observed one of the suspects, 28-year-old San Francisco resident Faalavelave Ulavale, outside his residence. Following a brief struggle, officers were able to take Ulavale into custody. Officers conducted a search of Ulavale and they located a firearm on his person. Ulavale was later transported to San Francisco County Jail and booked on one charge of felon in possession of a firearm (29800(a)(1) PC).

Investigators served the search warrant on Ulavale’s residence, on the 100 block of Northridge Road, which lead to the discovery of ammunition and a loaded magazine.

Investigators served a second search warrant on a residence on the 100 block of Northridge Road. Upon entering the residence, officers located and detained 30-year-old San Francisco resident Arturo Osorio.

The search of Osorio’s residence yielded three handguns, an assault pistol, one rifle, and two loaded assault rifles. Officers also located more than 15 high-capacity firearm magazines and several firearm accessories including a scope and flashlight. Additionally, an unfinished privately manufactured firearm or “Ghost Gun” was recovered. Osorio was later transported to San Francisco County Jail and booked on charges of being a felon in possession of a firearm (29800(a)(1) PC) and possession of an assault weapon in California (30605(a) PC).

The search warrant for the third suspect’s residence, also on the 100 block of Northridge Road, did not yield any additional evidence.

Two of the assault weapons recovered in this investigation were equipped with suppressors or silencers and six of the recovered firearms were “Ghost Guns.”

The San Francisco Police Department Crime Gun Investigations Center (CGIC) was developed in 2017 with a mission to disrupt gun violence through the consistent production of timely, precise, and actionable information. Through collaboration with the Crime Lab and Property Control Unit, CGIC provides valuable information for investigations, focusing its resources on the most violent connected firearms offenders.