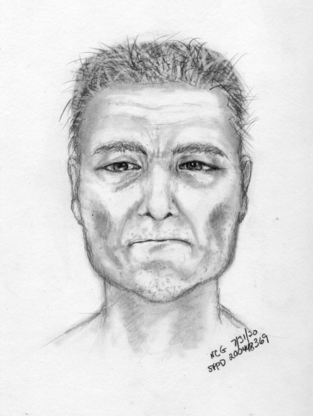 On Monday, July 27, 2020, at approximately 9:48 a.m., Northern Station officers responded to Fillmore St. and Oak St. for a report of an aggravated assault. Upon arrival, officers met with the victim, a 33-year-old female, who had visible injuries. Officers rendered aid and requested an EMS response. The victim stated she and her two children, newborn male, and 2-year-old female, were walking past an unknown adult male, who appeared homeless and was gathering up his belongings on the street. The unknown suspect made an incoherent statement to the victim, which caused the victim to turn around in response. The unknown suspect threw an object at the victim, striking the victim on her face, causing a laceration. The victim was transported to the hospital for non-life-threatening injuries and is in stable condition.

Investigators are asking anyone who witnessed the incident or can identify the suspect to contact SFPD. Attached is a sketch of the suspect in the incident. Please contact SFPD via tip line at 1-415- 575-4444 or Text a Tip to TIP411 and begin the text message with SFPD. You may remain anonymous.