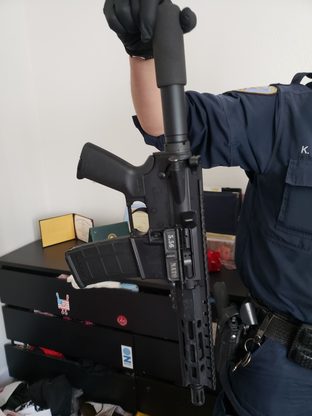 On Saturday, November 5, 2022, at approximately 1:24 p.m., San Francisco Police Officers from Northern Station responded to Lily Street and Laguna Street for a report of a robbery with a gun.

On scene, officers met with a 36-year-old victim and a 41-year-old victim who were followed to their vehicle after shopping in Hayes Valley by two armed suspects. One of the victims was wearing a wristwatch of high value and was initially approached by the suspects. The victim was able to lock himself in his vehicle as the suspects attempted to open the door. The suspects broke the window with an unknown object and the victim was able to flee the scene.

The SFPD Robbery unit took over the investigation. With assistance from the San Francisco County Sheriffs, investigators identified one of the suspects as 19-year-old Christopher Lagula of San Francisco. Investigators developed probable cause to obtain an arrest and search warrants for Lagula and his residence.

On November 14, 2022, officers located Lagula at the Hall of Justice and detained him without incident. During an arrest search, investigators seized the stolen and recovered wristwatch from Lagula's wrist.

On November 14, 2022, officers assigned to the SFPD Robbery unit, SFPD Narcotics unit, the Community Violence Reduction Team (CVRT), and officers from Northern Station, served a search warrant on the 400 block of Rose Street where they located and seized evidence relating to the investigation. Additionally, an unregistered rifle was seized and located within the residence.

While an arrest has been made, this remains an open and active investigation. Anyone with information is asked to call the SFPD Tip Line at 1-415-575-4444 or Text a Tip to TIP411 and begin the text message with SFPD. You may remain anonymous.

A photo of the seized rifle is attached to this news release.