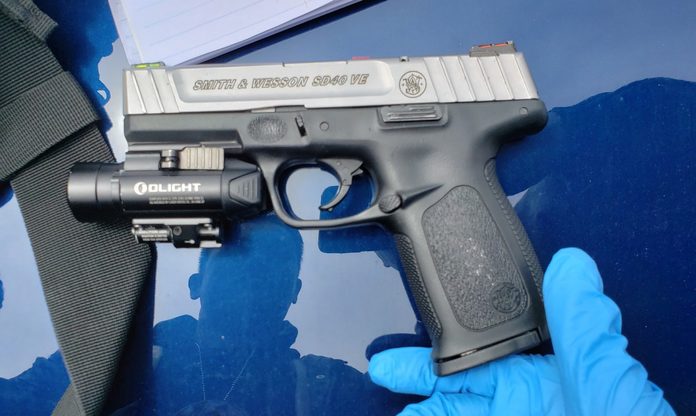 On June 18, 2021, at approximately 3:34 p.m., San Francisco Police officers from Ingleside Station responded to the 100 block of Raymond Avenue regarding a robbery that had just occurred.  The victim, a 24-year-old San Francisco resident told officers that he was walking on Raymond Avenue when the suspect exited a car, pointed a handgun, and demanded his property.  The victim surrendered his wallet and the suspect fled in the waiting car described as gray Honda Civic.

On June 24, 2021, at approximately 5:00 a.m., SFPD officers from Ingleside Station responded to a reported shooting near the Balboa Park BART Station. Upon arrival, they located the shooting victim, 21-year-old Oakland resident Kiemariah Richmond suffering from an apparent gunshot wound to his chest. Richmond was transported to a local hospital for treatment. Officers located two Glock style handguns at the scene, one of which was recovered from a gray Honda Civic which was the suspect vehicle from the June 18th robbery.  The handgun recovered from the Honda also matched the description of the firearm used in the robbery. Investigators determined that Richmond was the suspect in this robbery.

The SFPD Night Investigations Unit (NIU) commenced an investigation of the Balboa Park shooting which led to the identity of the suspects.  Investigators obtained arrest warrants for an 18-year-old female (who was a juvenile at the time of the incident) and 19-year-old male, South San Francisco resident Juel Dante James.  The investigation revealed that the juvenile suspect had been in a dating relationship with the shooting victim.  A search warrant was also authorized for a residence in South San Francisco.

Juel James and Dominique Julius Nelson, male, 20, of Sacramento were detained after leaving the residence.  Both James and Nelson possessed concealed firearms at the time of their arrests.  James was booked into the San Francisco County Jail on the warrant charges of attempted murder (664/187 PC), conspiracy (182(a)(1) PC), assault with a deadly weapon/semi-automatic firearm (243(b) PC) and carrying a loaded firearm with the intent to commit a felony (25800 PC).

The juvenile female was located on the perimeter of the police lines, placed under arrest, and later booked at the San Francisco Juvenile Justice Center (JJC) on the warrant charges alleging attempted murder (664/187 PC), conspiracy (182(a)(1) PC), assault with a deadly weapon/semi-automatic firearm (243(b) PC) and felony domestic violence (273.5 PC).

A 16-year-old male, Antioch resident was located during the search warrant service and later booked in San Mateo County on an outstanding carjacking warrant from Contra Costa County.

Photos of the firearms seized in the South San Francisco arrests accompany this news release.

While arrests have been made, these remain active investigations. Anyone with information is asked to call the SFPD Tip Line at 1-415-575-4444 or Text a Tip to TIP411 and begin the text message with SFPD.