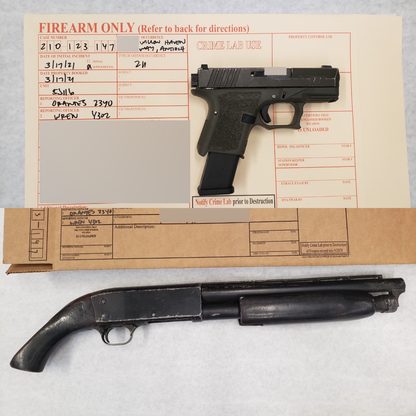 On February 23, 2021, at approximately 9:50 PM San Francisco Police officers responded to a reported robbery that occurred on the 1200 block of Mason Street.

Officers arrived on scene and met with the 67-year-old male victim who told them that he was inside a laundromat when he was approached by three unknown male suspects who threw him to the ground, assaulted him, stole his property, and fled the scene. The victim was treated for non-life-threatening injuries from the attack.

The SFPD Robbery Detail took over the investigation. Investigators developed information that led to the identity of the suspects who were identified as 19-year-old Calvin Berschell, 19-year old Jason Orozco, and 19-year-old Nolowde Beshears, all of Antioch, California.

In the early morning hours of Wednesday, March 17, 2021, SFPD investigators and members of the Tactical Unit served simultaneous search and arrest warrants on the 4900 block of Willowhaven Street and the 500 block of West 17th Street in Antioch. All three suspects were taken into custody without incident. Evidence related to the robbery and auto burglaries including clothing, a window punch, and two firearms was seized.

Photos of the seized firearms accompany this release.

The investigation and subsequent arrests were the culmination of a collaborative effort between the SFPD Robbery Detail, General Crimes Unit, Crime Lab, and the Antioch Police Department.

In addition to the robbery of the elderly male on February 23rd, the suspects were wanted in connection with multiple auto burglaries in the area of John and Powell Streets shortly before the robbery on Mason Street.

While arrests have been made, this incident is an open and active investigation. Anyone with information is asked to call the SFPD 24 Hour Tip Line at 1-415-575-4444 or Text a Tip to TIP411 and begin the text message with SFPD.

About the San Francisco Police Department:

The San Francisco Police Department stands for safety with respect for all. Hailed by the New York Times as a major city department “where police reform has worked,” SFPD continues to break ground with its voluntary Collaborative Reform Initiative and its work on Mayor London Breed’s ambitious Roadmap for Police Reforms. Since 2018, the department has worked in partnership with the California Department of Justice to implement 272 recommendations that aspire to make SFPD a national model of 21st Century policing. Follow our progress at https://sanfranciscopolice.org/reform.