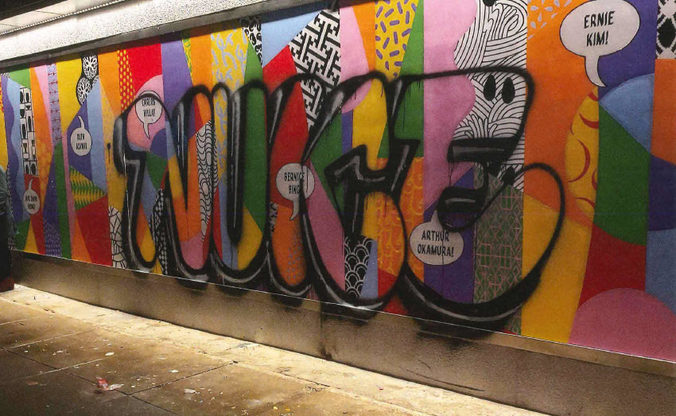 On Saturday January 2, 2021 at approximately 12:25AM, San Francisco Police officers from Tenderloin Station responded to the area of Hyde and Fulton Streets for a report of a vandalism in progress. A witness reported seeing an unknown male suspect spray painting over a mural on wall on the side of an art museum. The suspect was described as an unknown race male with shoulder-length hair, wearing a mask and dark clothing.

Upon their arrival officers observed a male suspect on the 100 block of Hyde Street matching the description provided by the witness. The subject was detained without incident and identified as 27 year-old Jeffrey Caron. Caron was positively identified as the suspect in the vandalism. Caron was transported to San Francisco County Jail where he was booked on one count of felony vandalism (594(b)(1) PC).

Jeffery Caron is suspected of using the graffiti name “Nuke.” A photo of the vandalism accompanies this news release.

While an arrest has been made, this incident is an open and active investigation. Anyone with information is asked to call the SFPD 24 Hour Tip Line at 1-415-575-4444 or Text a Tip to TIP411 and begin the text message with SFPD.