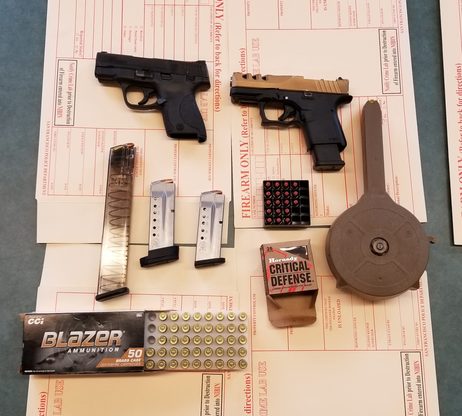 On Saturday April 25, 2020 at approximately 8:30 PM, San Francisco Police officers
responded to 26th Street and Folsom Street regarding a ShotSpotter activation for
gunshots. Officers arrived on scene and located spent shell casings and damage
caused by gunfire, but did not locate an injured victim. While on scene officers were
notified that a victim suffering from a gunshot wound walked into a nearby hospital.
Officers responded to the hospital and located an adult male victim with a gunshot
wound, which was determined as a non-life threatening injury.

The investigation determined that that two males were shooting at each other and fled
the scene. During the exchange of gun fire a male victim, surrounding buildings, and
vehicles were struck by bullets. Investigators immediately started following up on leads
and identified the suspects involved in the shooting. The suspects are known criminal
gang affiliates and SFPD Gang Task Force (GTF) leads the investigation.

On May 14, 2020, at approximately 4:30 AM officers conducted a search warrant
service on the 1400 block of Treat Way and arrested Gregory Mack, 26 year-old San
Francisco resident. During the search warrant service, handguns, high capacity
magazines, and ammunition were found and seized. Mack was booked for felony
charges of attempted homicide (664/187(a) PC), assault with a firearm (245(a)(2) PC),
carrying a concealed firearm (25400(a) PC), carrying a loaded firearm in a vehicle
(25850(a) PC), convicted felon in possession of ammunition (30305(a) PC), and
convicted felon in possession of a firearm (29800(a)(1) PC).

While arrests have been made this remains an open investigation. Anyone with
information about this incident is asked to call the SFPD 24-hour tip line at 1-415-575-
4444 or Text a Tip to TIP411 and begin the text message with SFPD. You may remain anonymous.