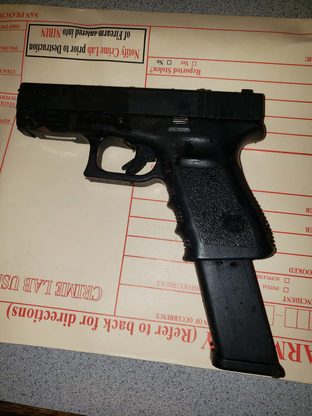 On February 16, 2021 at approximately 3:06 PM, two uniformed San Francisco Police officers from the Ingleside Station responded to a residence on the 500 block of Campbell Street regarding a report of two subjects breaking into a home.

Upon arriving to the scene, officers saw two suspects exiting the residence. One suspect ran to a waiting Ford SUV, occupied by at least one additional suspect, and fled the scene. Officers broadcasted the suspect and suspect vehicle description over police radio.

Responding officers located the vehicle and pursued the vehicle when the driver failed to stop. The suspects in the Ford evaded arrest and are outstanding. The second suspect ran eastbound on Campbell Avenue with the officers in foot pursuit. The officers identified themselves and ordered the suspect to stop. As the suspect fled, he appeared to stumble forward. The officers heard a gunshot and radioed for additional assistance and coordinated a perimeter.

The request for assistance resulted in a response from the California Highway Patrol Aviation Unit, the Daly City Police and University of California San Francisco Police Canine Units.

An SFPD officer located the suspect, later identified as 18-year-old San Francisco resident Roman Jeremiah Banks, behind a fence on the 100 block of Tucker Avenue. Officers continued to search the area for additional suspects and responded to 911 calls about subjects running through back yards. Officers recovered evidence items, but no additional suspects were located.

An investigation determined that Banks and the second suspect forced their way into the victim’s residence, past her caretaker, at gun point. They then rifled through drawers and closets before fleeing with US Currency.

On February 17, 2021 at approximately 9:45 AM, Ingleside District officers returned to the 500 block of Campbell Avenue to continue the investigation. Officers contacted residents and reviewed surveillance video that brought them to search a back yard. The officers located and seized a Glock .40 caliber pistol. A photo of the pistol accompanies this news release.

While an arrest has been made, this remains an active and ongoing investigation. Anyone with information is asked to call the SFPD Tip Line at 1-415-575-4444 or Text a Tip to TIP411 and begin the text message with SFPD. You may remain anonymous.