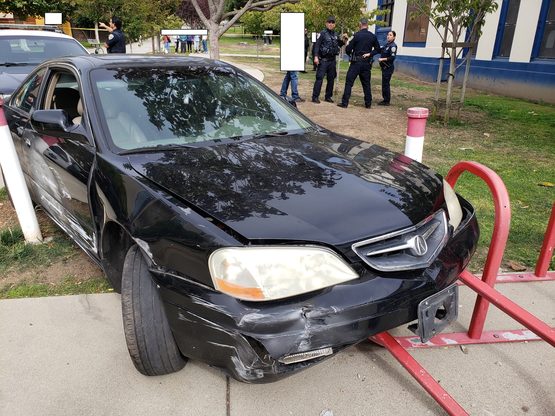 On August 24, 2022, at approximately 3:15 pm San Francisco Police Department Burglary investigators were conducting a plainclothes operation on the unit block of Leavenworth St. regarding a possible illegal fencing operation. Investigators observed a transaction of possible stolen property with occupants seated in a parked vehicle and an adult male during the operation. This vehicle was suspected of being used in auto burglaries. Upon further investigation, the license plate of the vehicle was discovered to be stolen out of San Leandro, CA. Uniformed police officers responded to the area and attempted a traffic stop at Turk and Hyde Streets. During this traffic stop the suspect vehicle, which was driven by a female with a male front passenger, drove in reverse and rammed the occupied police vehicle several times, which injured the officer. As the suspect vehicle fled the scene it ran over department-issued police bicycles parked on the sidewalk and a vehicle pursuit ensued. During the pursuit, the suspect vehicle collided with several vehicles nearly struck pedestrians and drove recklessly to avoid arrest. Spike strips were deployed by SFPD members in the area of Broadway and Polk Street as an intervention technique in an effort to safely disable the vehicle and minimize the risk to the public.

The vehicle came to a stop in the area of Galilee Lane at Laguna Street after colliding with a fixed metal bicycle rack and anti-vehicle bollard on a pedestrian walkway. The driver, 29-year-old female Tiara Raina Hewitt, and passenger, 33-year-old male Demarco Ransom, both from San Francisco, were taken into custody.

Officers searched the suspect vehicle and located and seized numerous items which include suspected stolen items and a loaded handgun.

Hewitt was discovered to have outstanding arrest warrants listed below.

Ransom was discovered to have outstanding arrest warrants listed below.

The male who investigators observed doing a transaction with the suspects with suspected stolen property was detained on the unit block of Leavenworth St. During the investigation investigators located and seized a laptop, over-the-counter medications, cosmetics, and other items inside his vehicle, which were identified as stolen items. Investigators developed probable cause to arrest this male, 54-year-old male Jorge Robles of Daly City, CA for receiving stolen property (496(a) PC).

A photo of the suspect vehicle accompanies this news release.

While arrests have been made, this remains an open and active investigation.  Anyone with information is asked to call the SFPD Tip Line at 1-415-575-4444 or Text a Tip to TIP411 and begin the text message with SFPD. You may remain anonymous.