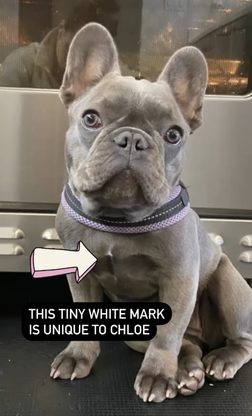 On Tuesday January 5, 2020 at approximately 5:52 p.m., San Francisco Police officers from Central Station responded to the 1700 block of Hyde Street for a report of a robbery. Officers met with a 30-year-old female victim who told them she had just been robbed. The victim said she was walking her dog when she was approached by three unknown male suspects. One of the suspects struck the victim in the face multiple times. The victim said she observed a firearm in the suspect's other hand. The suspect then took the victim's dog, a grey French Bulldog puppy. The three suspects got into a waiting vehicle being operated by a fourth suspect and fled the scene. Officers summoned medics to the scene to treat the victim for her injuries. The victim was transported to a local hospital and was treated for non-life-threatening injuries.

Chloe, the victim’s puppy, is still missing and the suspects are still outstanding.

To view the video of the suspect vehicle, click on the link below:

This investigation is active and ongoing. Robbery Investigators are asking anyone with information - including cell phone or surveillance camera video - regarding this incident to call the SFPD 24-hour-tip line at 1-415-575-4444 or Text a Tip to TIP411 and begin the message with SFPD.