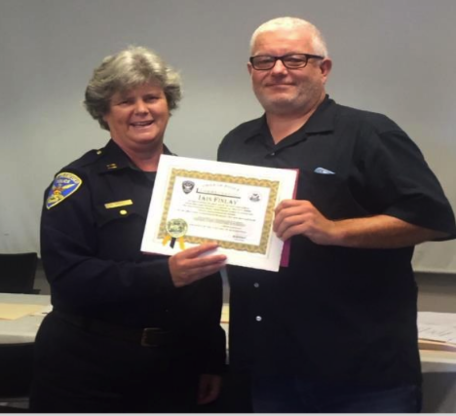 Captain Bailey and Park Station wanted to acknowledge the heroic actions of a fast– acting civilian, who helped apprehend a suspect, who was attempting to steal a vehicle. Captain Bailey proudly announces a courageous citizen, Iain Finlay, as “Citizens of the Month” for September 2018. Congratulations to Iain Finlay!!!

We are so appreciative of his efforts and bravery, and citizen like Iain are an enormous asset to our beautiful district. Thank you, Iain!

A little about Iain Finlay’s personal life. Iain was born in St Helens, an industrial town in Northern England in the 1960’s. Iain’s parents were a Nurse and a Scientific Officer. In 1988, Iain graduated from college, where he study Math/Business. While in college, Iain spent many summers in the U.S. on work exchanges in New Jersey, New York, and California. After graduating, Iain worked for nonprofit work exchanges in New York for a few years. Iain’s U.S. Work Visa expired, and he returned to the United Kingdom. During this time, Iain applied through the Diversity Immigrant Visa Program, and eventually was successful. After being granted a Visa, Iain was employed by a travel company as their Controller in Florida.

A year after, Iain decided to move to San Francisco, where he had close friends, and has lived in San Francisco ever since. Now, Iain works for a nonprofit finance and in Real Estate. Iain’s hobbies include travelling, bicycling, horse riding, running, and Do It Yourself (DIY) type projects.

Tags:
Announcements,
Citizen of the Month