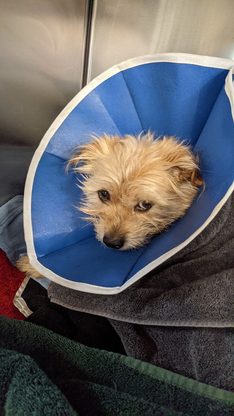 On Wednesday, October 27, 2021, at approximately 5:50 PM, San Francisco Police officers from the Bayview District Station responded to the 1400 block of Shafter Ave. regarding a dog that was just stabbed.

Upon arrival, officers contacted a 50-year-old female victim who was holding her Terrier mix dog that was suffering from a stab wound. Officers immediately rendered aid to the dog and transported the dog to the animal hospital with life-threatening injuries. The victim stated that she and her dog were sitting in her parked vehicle when a male without provocation brandished a knife at the victim, threatened the victim, then proceeded to stab the dog through the vehicle window and walked away. During the investigation, the suspect, 35-year-old male Derrick Juan Strong of San Francisco, was located and arrested by officers near the scene of the stabbing. Officers conducted a search of the suspect and located and seized a knife that was in his possession.

Officers developed probable cause to arrest Strong for criminal threats (422(a) PC), maliciously injuring an animal (597(a) PC), and brandishing a weapon other than a firearm (417(a)(1) PC) for this unprovoked violent attack.

Thanks to the quick response and actions of the officers who immediately rendered aid and transported the dog for his life-threatening injuries, he is now at home recovering with his family. This news release is accompanied by a photograph of the dog after undergoing emergency veterinarian care.

While an arrest has been made, this remains an open investigation. Anyone with information is asked to call the SFPD Tip Line at 1-415-575-4444 or Text a Tip to TIP411 and begin the text message with SFPD