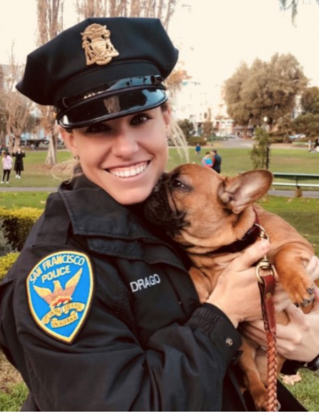 Officer Drago was born in Walnut Creek, CA. She graduated from St. Francis High School in Mountain View, CA and went on to attend Fresno State University where she received a Bachelor of Science Degree in Criminal Justice. Officer Drago joined the San Francisco Police Department in October 2015. After graduating from the Police Academy, she was assigned to Northern Station for field training. After completing field training, she was assigned to Tenderloin Station for probation. After probation, she was assigned to Central Station as her permanent assignment. Officer Drago is Crisis Intervention Trained and can be seen patrolling throughout the district. Officer Drago’s favorite thing about the Central District is the diversity of crime and the people she works with.

Tags:
Officer of the Month