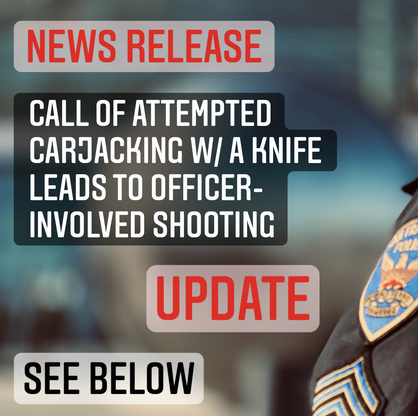 On Saturday, October 10, 2020, at approximately 11:26 PM officers responded to Market and Gough Streets regarding numerous 911 calls reporting a carjacking at knifepoint. Officers located the suspect and pursued him to the unit block of Otis Street where they attempted to detain him. During this contact, an officer-involved shooting occurred, which was captured on the officers’ body-worn camera (BWC). The suspect was struck by gunfire and officers immediately rendered aid and summoned medics to the scene. The suspect succumbed to the injuries and was declared deceased at the scene. Officers located a knife at the scene of the officer-involved shooting.

The San Francisco Office of the Chief Medical Examiner (OCME) has identified the suspect as 21-year-old Cesar Antonio Vargas of Fairfield.

Investigators believe that Vargas attempted to enter several other vehicles in the area of Market and Valencia Streets on October 10th between approximately 11:15 PM and 11:30 PM and are asking for any potential victims or witnesses to come forward. Anyone with information about this incident is asked to call the SFPD 24 Hour Tip Line at 1-415-575-4444 or Text-A-Tip to TIP411 and begin the text message with SFPD.

As part of the San Francisco Police Department’s commitment towards accountability and transparency with our community, a virtual town hall meeting will be held on Monday, October 19, 2020 from 3:00 until 5:00 PM to provide the community with an update on the investigation of the officer involved shooting.

This virtual town hall is being held to protect the health and safety of the public and essential workers during the COVID-19 pandemic.

Following a presentation by SFPD command staff, the call-in numbers below are available to viewers wishing to offer public comment.