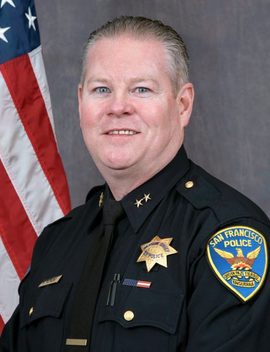 Assistant Chief Michael Redmond is a third generation San Franciscan, born and raised in San Francisco’s Noe Valley (Mission) and Ingleside Districts. He attended Sacred Heart High School and graduated in the class of 1987. He joined the SFPD in 1994, working assignments at Tenderloin, Bayview and Northern Stations. In his role as a Lieutenant and Sergeant he worked at Bayview, the Police Academy, Ingleside and Park Stations. He was promoted to Captain in December of 2012 and took command of the Southern Police District. In June of 2014 he was promoted to the Commander of the Metro Division in Patrol and in March of 2015 he was promoted to Deputy Chief of Special Operations Bureau. In September 2019, he was promoted to his current rank and assignment, Assistant Chief.