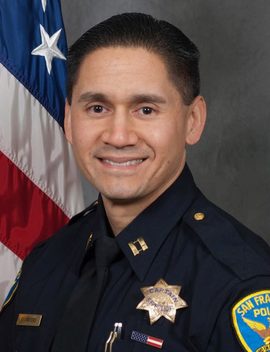 Captain Eric Vintero was born and raised in San Francisco, where he graduated from George Washington High School. He earned his Associate of Science degree in Administration of Justice from City College of San Francisco and a Bachelor of Science degree in Public Administration from the University of San Francisco. Vintero says he chose a law enforcement career because he wanted to help people and believes police officers make a difference in their communities. He graduated from the San Francisco Police Academy in April of 1995, after which he worked at Northern Station, Richmond Station, Ingleside Station, Southern Station and on the Tactical SWAT team. As a sergeant, he worked at Tenderloin Station, Taraval Station, Park Station, Mission Station, Bayview Station and on Robbery Detail. As a lieutenant, he worked at Tenderloin Station, Southern Station, Ingleside Station and in the Legal Division. After his promotion to captain, Vintero served in Richmond Station, as Night Captain, and in the Homeland Security Unit and Crime Information Services.