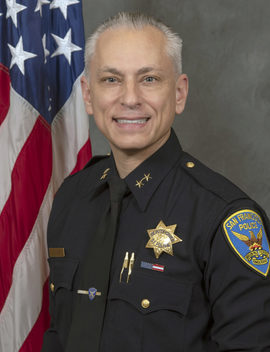 Deputy Chief David Lazar is a 4th generation San Franciscan and became a member of the San Francisco Police Department in 1991. He attended public school while growing up in the Sunset and Richmond Districts of the City, graduating from Downtown Senior High School in the Mission District. Deputy Chief Lazar was inspired at a young age to join the SFPD as his mother was a Police Dispatcher. He spent his teenage years as a Police Activities League Cadet.

Deputy Chief Lazar has extensive policing and command-level experience. He has been assigned to eight of the ten district stations, working all over the City in patrol and in various capacities from officer through the rank of Captain, serving in leadership and management roles since 2001. After his work as a Sergeant in patrol and an Inspector in the Investigations Bureau, he promoted to Lieutenant and managed patrol shifts, was the Director of the Police Academy and started Operation Outreach, coordinating the Department’s Response to Homelessness.

In 2008, Deputy Chief Lazar was promoted to Captain and had the opportunity to command ten separate assignments throughout the Department in the Field Operations, Investigations, Special Operations and Administration Bureaus including the Night Supervising Captain, Domestic Violence, Juvenile, Homicide, Robbery, the Gang Task Force, Ingleside Station, the Forensic Services Division, the Urban Area Security Initiative, the Training Division and Central Station.

Deputy Chief Lazar has two decades of tremendous experience planning, managing and leading policing for both small and large planned and unplanned events including 1st Amendment demonstrations, critical incidents and large-scale parades such as the Pride and Chinese New Year’s Parade and major events such as the America’s Cup in 2013 and Super Bowl City (50th NFL Super Bowl) in 2016.

In 2018, Deputy Chief Lazar led the facilitation on opening the City’s Healthy Streets Operations Center. “HSOC” which has been established to bring the City’s partners together in a collaborative setting to address homelessness and street behavior in real time.

In 2021, Deputy Chief Lazar was selected to lead the Field Operations Bureau which includes the 10 district police stations and the Department’s Community Engagement Division.

He has been an Instructor at the Police Academy since 1998, teaching subjects on Community Policing, Professionalism, Leadership, 21st Century Policing and Criminal Law.

Deputy Chief Lazar holds a Bachelor of Arts degree in Project Management from Saint Mary’s College and is a graduate of the Police Executive Research Forum’s Senior Management Institute for Police Class 49, Boston. He has completed California POST’s Supervisory Leadership Institute and Executive Development Course. He is a graduate of Harvard’s Kennedy School of Government State and Local Executives Course.

Deputy Chief Lazar is so very grateful to serve in the City where he was raised in and resides.