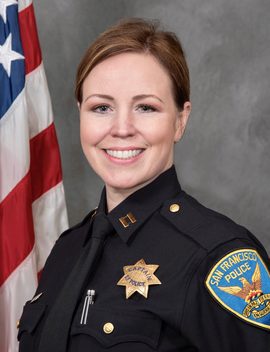 Captain Alexa L. O'Brien was born in San Francisco and raised in New York City, after which she returned to the West Coast to attend the University of San Francisco. After earning a B.S. in Sociology with a minor in Criminology, O'Brien joined the SFPD in 2000, initially working at Southern, Mission and Northern stations. She worked at Ingleside Station as a sergeant before moving to Station Investigations. As a lieutenant she managed the Night Investigation Unit and Homicide up until her promotion to captain in 2016.