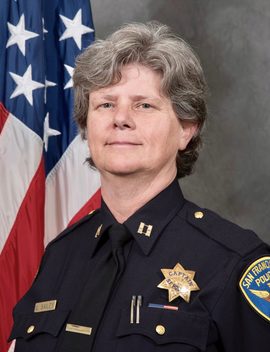 Captain Una Bailey grew up in Dumanway, a town in County Cork in southwestern Ireland. She moved to San Francisco more than 30 years ago and joined the San Francisco Police Department in 2001. She initially served at Ingleside and Central Stations before moving to Mission Station, where she worked on outreach to the homeless. After being promoted to sergeant, Bailey served at Tenderloin Station and then worked on investigations in the Special Victims Unit, in Risk Management and at Ingleside Station. As a lieutenant, she served at Richmond and Taraval Stations and in the Special Victims Unit. She was promoted to captain of that unit in 2016 and became captain of Park Station in October 2017. She came to SFPD's Strategic Management Bureau in November, 2019