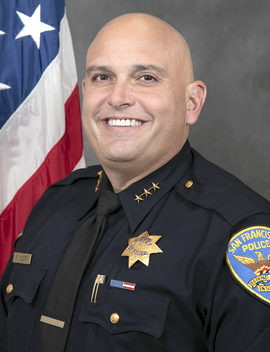 Assistant Chief Robert Moser was born and raised in San Francisco. Before joining the San Francisco Police Academy in January 1995, he graduated from Saint Ignatius High School, after which he earned a Bachelor of Arts degree in Political Science from the University of California at Davis and a Master’s Degree in Public Administration from the University of San Francisco. He has worked in a variety of assignments including Northern, Southern, Tenderloin, Central, Bayview and Mission Stations, as well as in Investigations and Internal Affairs. He is a graduate of Leadership San Francisco, the Police Executive Research Forum’s Senior Management Institute for Police and the FBI National Academy. As deputy chief of the Administration Bureau, Moser oversaw a variety of support functions for other SFPD bureaus, including but not limited to training, education, fleet and facilities management, records and property management and human resources support. He was promoted to Chief of Staff in May, 2019.