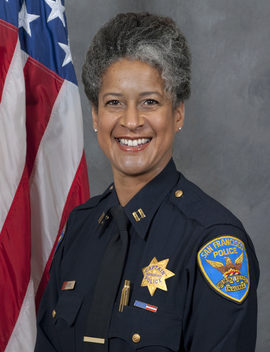 Captain Milanda Moore is a San Francisco native who earned her Bachelor of Arts degree in Broadcast Communication Arts from San Francisco State University. Before joining the San Francisco Police Academy in 1992, she worked as a production assistant in broadcasting at a local radio and TV station.

Moore says she decided to go into law enforcement for the “excitement and adventure.” In her more than 26 years in the SFPD, she has worked as a patrol officer, as part of the Hate Crime Unit and as a founding member of the Climate of Trust Police Exchange Program. She has been honored by the Department of Justice for her work investigating civil rights complaints, and in 2006 received a Community Service Award from the International Association of Women Police. After being promoted to lieutenant, Moore worked in patrol at Richmond Station and in administration in the Permit Bureau. In her free time, since 1990, Moore has danced and played music during the San Francisco Carnaval. In 1997, she was named Carnaval Queen.