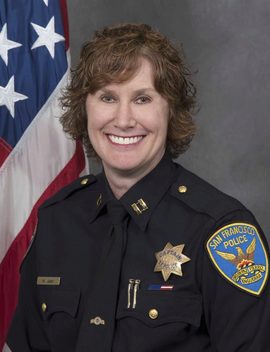 Captain Michelle Jean was born Gridley, California and grew up in Yuba City, California. She joined San Francisco Police Department in 1991. Her father, a retired police Captain in the Sutter County Sheriff’s Department, inspired her to pursue a career in law enforcement. She began her SFPD career with assignments at Bayview, Tenderloin and Park stations. As a Sergeant, she worked six and a half years at Ingleside Station. After being promoted to Lieutenant, she served at Mission, Richmond and Tenderloin stations.  She also worked in the Department’s Special Victims Unit, followed by an assignment with the Internal Affairs Division and at the SFPD Academy, before being appointed to Captain and serving in the Homeland Security Unit. Upon graduation from the FBI National Academy, she was assigned to Richmond Station in 2018.