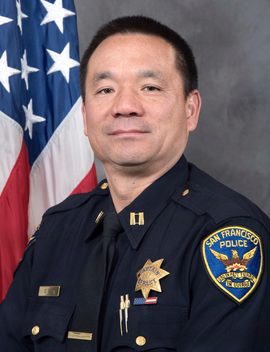 Captain Gregory Mar was born in San Francisco, earned his Bachelor of Science in Biological Science from the University of California at Davis, and went on to earn a doctorate in Dental Surgery from the University of the Pacific Dental School in 1988. While in dental school, Mar became fascinated with law enforcement, which he considers a “noble profession.” He joined the SFPD reserves in 1986, and five years later signed up as a fulltime department employee. While serving in the department, Mar continued his studies, earning a master’s degree in Educational Psychology from the University of the Pacific in 1994. He has since served in the Northern, Mission and Central stations and in Crime Scene Investigations and as a platoon commander at Taraval Station. After his promotion to captain in March 2016 but before joining the Airport Bureau, he served as the commanding officer of the Forensic Services Division and Special Victim’s Unit.