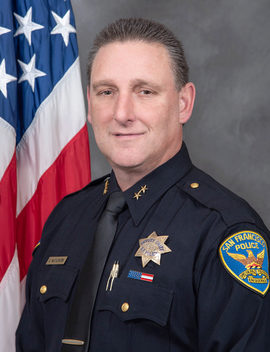 Deputy Chief McEachern graduated from the San Francisco Police Department in 1991 and rose through the ranks holding various operational positions including management and command of five separate police districts and the department’s Criminal Investigations Bureau. He has also held administrative positions including the Director of the Training Division and the head of the department’s Risk Management Division. Deputy Chief McEachern has more than twenty years’ experience managing small and large scale events including the planning and management of the 2007 Major League Baseball All-Star Game in San Francisco and was the officer-in-charge of all events at Oracle Park, the home of the San Francisco Giants, for more than ten years. Deputy Chief McEachern is an instructor and subject matter expert on small and large planned and unplanned events.

Deputy Chief McEachern has completed numerous Professional Development Programs including the California POST Executive Development Course, the Senior Management Institute for Policing (SMIP) in Boston, Massachusetts and was a graduate of the 239th session of the FBI National Academy in Quantico, Virginia.