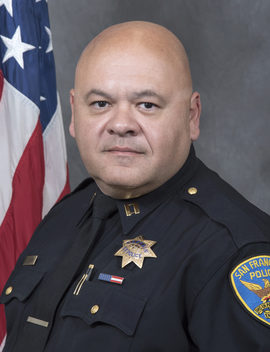 Captain Gaetano Caltagirone belongs to the first generation of his Sicilian family to be born and raised in San Francisco. He earned a Bachelor of Science degree in Business Administration from St. Mary’s College before deciding to make his career in law enforcement. He has worked as a patrol officer in the Bayview, Central, Park, and Southern districts, and as a sergeant in the Tenderloin District. On his promotion to lieutenant he was responsible for the Market Street foot beat patrol and served as lieutenant of patrol at Southern Station. He also worked in the Airport Bureau’s Traffic and Patrol Divisions and as lieutenant of the Taraval Station Investigation Team and at Tenderloin Station. Caltagirone became the acting night captain at Mission Station in July 2017, taking over as captain three months later.