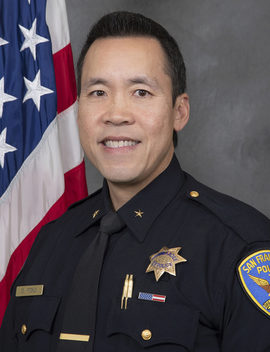 Commander Daryl Fong was born and raised in San Francisco’s Bayview District, and attended elementary school at Saints Peter and Paul School in North Beach. He then attended Sacred Heart Cathedral Preparatory in San Francisco. He joined the San Francisco Police Department in 1994 after earning a Bachelor of Science degree in Marketing at San Francisco State University. Commander Fong trained at Richmond Station, after which he served at Central Station in patrol, plainclothes and as a foot beat and school resource officer. In 2008, he was promoted to sergeant where he served as a field training sergeant, Internal Affairs investigator and as a public information officer for the Department’s Media Relations Unit. In 2012, he was promoted to lieutenant, where he served at Northern Station, the police academy’s Professional Development Unit and in the Department’s Special Investigations Division. In 2016 he was promoted to captain and assigned to Southern Station as the commanding officer. In April of 2019 he was promoted to the Commander of the Administration Bureau, Staff Services. In September, 2019 he became Commander of the Community Engagement Division.